Yes, I know it’s a cliché but it has lots of truth to me: a picture’s worth a thousand words. When teaching English, Spanish or French  quite often students come across words that even if not abstract, they’re hard for them to grasp the meaning by just looking up the word in the dictionary, unless it’s a bilingual dictionary.

Let’s consider for example the word “groom”. The student asks the mea 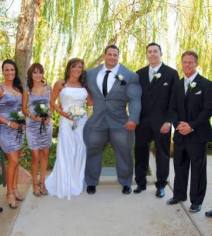 ning of the word and passively receives the information.

The teacher:” well, … you know when you get married the woman is the bride and the man is the groom or bridegroom”.

By telling the student to look up in google images he will be actively learning the word and visualizing it, without even having to think about the word in L1.

Take the word “STAMINA”, for instance, which Trump said Hillary Clinton doesn’t have ( or the looks). Many Brazilian students get the sound of the word but not the meaning.

By just showing a picture of someone running, the teacher tells students that that person has stamina and asks them to guess the meaning. Chances are they will say, power, energy, and bingo got the word without having even translated the word into L1.

The word “GAP” – which can be abstract but can also be easily visualized and understood based on the pictures and context. In the past I used to doodle on paper trying to convey the image, but it wouldn’t solve the student’s passivity. Now having the student look it up makes them an active agent in their learning.

You may say, “that’s exactly what students do when using a dictionary” – yes, but… the trick is that by using a monolingual dictionary often times they can’t understand the definition or there are too many definitions to go through. In a bilingual dictionary they will be still focusing on L1 memory and will most likely forget the L2 corresponding word.

Larissa Albano in her blog summarized the use of pictures beautifully using the acrostic PICTURE (https://www.britishcouncil.org/voices-magazine/how-english-language-teachers-use-pictures-class):

As you can see, an image can be much more than the definition of an object, feeling or action, but it can also be incorporated into the lesson plan.

Of course, the teacher won’t have to follow all these steps for every single word the student can’t understand, but the latter will be in charge of his own vocabulary learning.