Yes, Virginia, dragons do exist and they appear in many forms and shapes. Let me tell you a true story:

“Many, many years ago in a far, far away land, known as Terra Brasilis, there was a kingdom commanded by two queens . (No Virginia they were not Lovers – not that there’s anything wrong with that – but that’s not part of the story). Queen Val and Queen Rosie  were very talented and hard-working monarchs, doing their best to provide a safe realm for their subjects.

One day, Queen Val said: “Queen Rosie, I see you have a good English teacher, what’s his name again? Ah yes, Sir Mo. I shall have lessons with him as well. After all if some of my subjects can have classes with him I have priority”.

Queen Val had already reached an advanced English level but she insisted on having classes and said:

“I shall have English classes but I shall not use a textbook or do homework. That’s for mortals”.

Sir Mo gulped and stammered: B-b-b-but, queen, I m-m-mean, your Majesty, having a 90-minute class once a week will not be enough. You need to practice outside that time.

Queen Val waved him to be silent and shouted: “SILENCE!”

Sir Mo started preparing his lessons, newspaper articles he thought she’d be interested in, video clips, podcasts, interviews, but it seemed that queen Val was only growing more despondent and bored. She’d yawn and say: “Boring! Next! I don’t like this article! I don’t care about this exercise.”

One day, while Sir Mo drove to her castle, he saw dark and heavy clouds with lightning and thunder surrounding her turret. Sir Mo saw it as an omen.

After summoned to the presence of the queen, Sir Mo apologetically bowed and said – “I’m sorry, your Majesty, but we’ve trying to have classes all this time and I-I-I-I’m afraid I am not the right knight for your language needs. Your Majesty should search for a knight with a different approach to language teaching. You’re spending money on a knighted teacher when you just want to have “conversation”. Why not hire a younger native English speaker buffoon to keep your interest up?”

Suddenly the Queen began to huff and puff, and started to spew fire through her nostrils, and with fierce eyes roared: “If you’re not going to be MY teacher, you will not teach anyone else in my kingdom. From this day on you are banished from my domain”. And with a creepy laughter, she walked out. 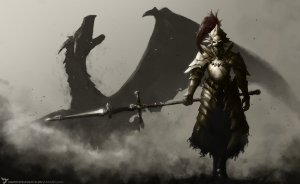